4 Most Common Kinds of Property Crime 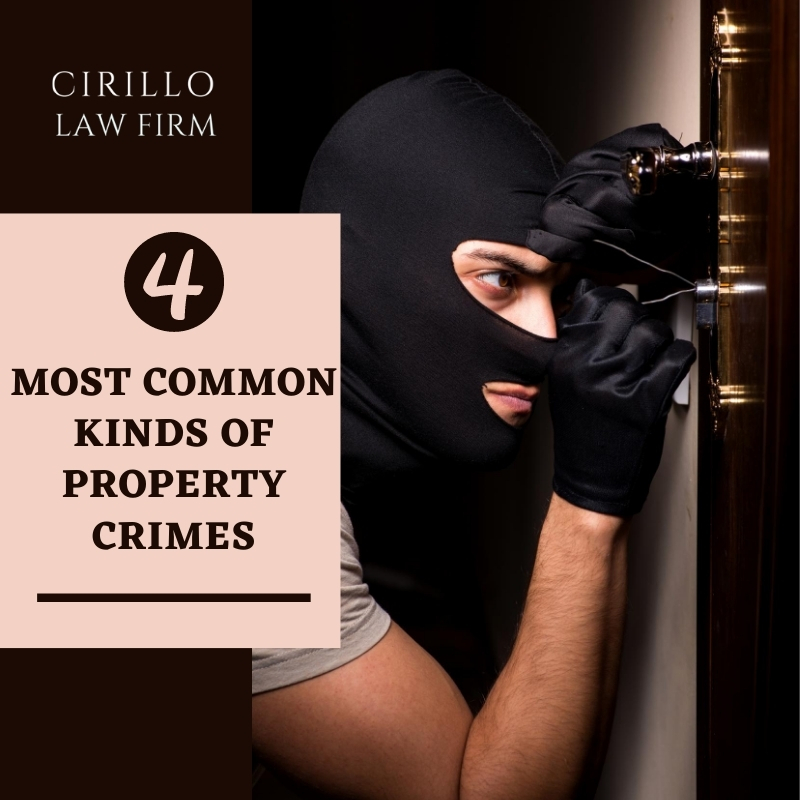 In the United States, property crimes are common. There were approximately nine million property crime offenses in the country, according to the FBI. This large number is partially due to the fact that there are several forms of offenses that come under the property crime umbrella.

Property crimes range from low-level crimes to serious crimes. Below are some of the commonly reported examples of property crimes.

Larceny theft is described as the unlawful taking or theft of another person’s property from the possession. Types involve the theft of bicycle parts, and motor vehicle components, pocket-picking, or the stealing of any property. According to the FBI, 26% of larceny-thefts were thefts from motor vehicles.

According to Statista in 2019, a total of 912 firearms were stolen during larceny in the U.S. and out of which 137 firearms were lost or stolen in Connecticut.

A burglary occurs when someone enters a home, barn or house trailer illegally through coercion or force and steals property. According to the FBI, burglaries accounted for 18.2% of the number of property crimes reported in the United States, and Residential property burglaries comprised 67.2% of all burglary offenses.

According to Statista in 2018, an estimated 1.23 million cases occurred nationwide due to burglary.

Arson is one of the most serious types of property offenses. If a person sets fire to any land or structure, he or she commits arson. Charges could be more serious if investors were to be defrauded or someone injured.

According to Statista in 2018, a total of 7,989 motor vehicles was set on fire in the United States.

The crime of vandalism occurs when an individual defaces or damages property without permission. Graffiti, smashing glass, throwing eggs are forms of vandalism. Other vandalism terms include criminal damage, malicious mischief, and malicious trespass.

If you've been charged with property crime, please contact the Best Lawyer in New Haven,  Connecticut to lessen your charges.